Over the past few months there has been a huge global increase in environmental compliance duties, to the point that, in the near future, all the companies listed on international stock exchanges would be required to publish their greenhouse gas emissions and explain the initiatives they are taking to reduce them.

The most recent headline has been the proposed regulation issued by the U.S. Securities and Exchange Commission (SEC) on March 21, 2022. If this regulation is approved, it would require all companies listed on the U.S. stock exchange, to publish:

Despite the huge impact its approval would have, the rule proposed by SEC is only part of the global trend that points to greater involvement by companies in the fight against climate change.

According to the OECD, 15 G20 companies have regulations that require companies to publish environmental reports on a regular basis and require the quantification of carbon emissions. Among them, the United Kingdom and Japan have been reforming their regulatory plans so that, as of April 2022, each time more companies are obligated to publish reports on the actions and exposure they have established to face climate change.

Meanwhile, the European Union, which already requires large companies and financial institutions to report on how they handle social and environmental challenges, proposed new rules that would expand the scope of this regulation to apply to all companies listed on a stock exchange, or that meet certain size and income parameters.

The aforementioned regulation, despite coming from other countries, will have a great impact in Latin America because the duties of publishing information related to climate change usually include subsidiaries that companies from those countries have in the rest of the world.

Additionally, it is estimated that these duties will be indirectly imposed on local businesses, since it is expected that companies from countries such as the United States, the European Union, and the United Kingdom choose suppliers that meet these standards, to facilitate regulatory compliance and reduce the emissions from their operations.

Greater value will be given to companies that already have experience demonstrating their emission reduction:

Due to the high scrutiny that companies in the United States and Europe have received regarding the transparency and truthfulness of their reports on climate change, large companies will give priority to suppliers with more experience reporting their emissions transparently.

Over the past decade, lawsuits related to climate change have increased exponentially, and many of them have been in connection with the information that companies have published regarding their climate footprint and proposed reduction plans. 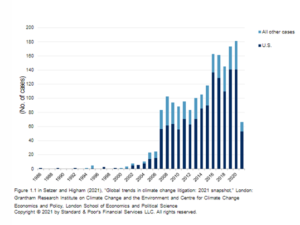 Moreover, 58% of the aforementioned court cases have obtained ruling ordering greater transparency and action by companies and governments to address climate change.  In contrast, only 32% of cases have resulted in unfavorable judgments for organizations advocating for climate action.

Confronted with such clear figures, it is expected that the top management of companies will make great efforts to ensure that all actors in their business chain comply with the new standards.

We are now at the stage where companies must pay greater attention to their environmental impacts, not only to have a better image before the public, but to comply with new regulations to combat climate change, which is a trend that is clearly on the rise.

As has happened throughout history, changes in standards present great opportunities for companies that are prepared to adopt and even take advantage of them, but they also pose great risks for businesses that do not adapt to the new market conditions.