In 2008, at the age of 27, she sat examinations for the admission to the Public Body of Spanish State Lawyers (Abogados del Estado). She achieved the maximum grade among all the candidates and was admitted as State Lawyer.

She began working as State Lawyer in León and then she was transferred to the Courts on Judicial Review of Administrative Decisions (Juzgados de lo Contencioso-Administrativo) of Madrid.

Afterwards, from December 2010 to May 2013, she worked in the Courtroom on Judicial Review of Administrative Decisions (Sala de lo Contencioso-Administrativo) of the Higher Court of Justice of Madrid (Tribunal Superior de Justicia de Madrid) and was the manager of the agreement on legal advisory between the Public Body of State Lawyers and the Spanish Public Manager of Railway Infrastructures (Administrador de Infraestructuras Ferroviarias –ADIF–). In May 2013, she joined the Spanish Public Manager of Railway Infrastructures (ADIF) as legal manager.

Public Procurement
In light of her experience as legal manager of the Spanish Public Manager of Railway Infrastructures (ADIF), she possesses a wide experience in public procurement, especially in the fields of PPP (public private partnership), the spread of railway networks and the issuance of new means of innovative collaboration agreements between the public and the private sector.

She has also advised in several legal aspects of the business terms of contracts granted under administrative concession schemes the management of public properties.

Litigation
She has represented many Public Authorities and Public Bodies in litigation related to public procurement, claims for administrative liability, environmental affairs and waters regulations. She has also worked in complex cases related to the enforcement of judgements.

Regulatory Affairs
She also possesses a wide experience in the fields of new renewable energies, both in the fields of regulatory terms and litigation. She is highly skilled in the licensing of power plants and the several amendments of the Spanish legal framework of the power sector during the last years.

Elena Veleiro features in various legal directories such as: 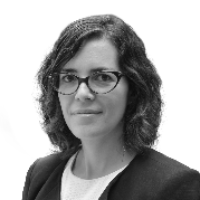