Juan joined Pérez-Llorca in May 2011 and became a Partner of the firm in January 2013.

Until his incorporation in Pérez-Llorca, he held the position of State Lawyer before the Court of Justice of the European Union in the Sub-Directorate of European Union and International Affairs of the General State Attorney, being the coordinator of the Legal Assistance Agreements signed between the General State Attorney and various regulatory bodies in matters of European Union Law during the years 2009 to 2011. Previously, he worked as a State Attorney at the Ministry of the Interior and before the Superior Court of Justice of Madrid and the Courts and Courts of Madrid.

He is an expert in litigation and in the various branches of Public Law and regulated sectors in his capacity as State Attorney, coordinator of Legal Assistance Agreements signed with national regulatory bodies.

Great connoisseur, in turn, of European Union Law, having defended the Kingdom of Spain in numerous proceedings in his more than seven years of experience before the Courts of the European Union.

Likewise, he currently intervenes in litigation before European and Spanish courts invoking in many cases the application of European Union law and also advises his clients before other European institutions, such as the European Commission or the European Central Bank.

His working languages ​​are Spanish, English, German and French.

Intense litigation activity in areas of the financial sector (abusive clauses, bank resolution, etc.), both before national courts and before European institutions and courts.

Extensive experience in consultative and contentious aspects in his capacity as State Lawyer coordinating the Legal Assistance Agreements signed between the General State Attorney and various national regulatory bodies.

Consultative and contentious advice to numerous public bodies and other entities of the state public sector.

Advice on procedures followed before the CNMV.

Juan is the author of numerous doctrinal articles published in specialized magazines and editorials, such as Noticias de la UE or Gaceta Jurídica de la UE y de la Competencia and has taught at different study centers (Center for Legal Studies of the Ministry of Justice, Center of Garrigues Studies, Villanueva University Center, among others).

He has also written several articles on European Union law and others on the pharmaceutical sector such as “Notebooks on Pharmaceutical Law”.

Madrid Bar Association (ICAM).
Spanish Association for the Study of European Law (AEDEUR).
Member of the CCBE Delegation to the Court of Justice and General of the European Union and EFTA Court (EFTA).

Juan Rodríguez Cárcamo has been mentioned in different legal directories such as: 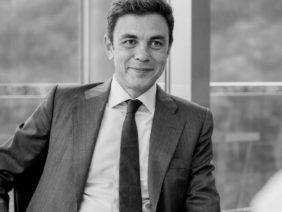