Pablo González joined Pérez-Llorca in 2006, after two years of experience as a lawyer in a prestigious national law firm. He was appointed partner of the Firm in January 2014.

Spanish and English. He also reads and understands French.

Since the beginning of his professional career, Pablo has advised national and foreign clients in all types of commercial operations, and in particular in mergers and acquisitions (M&A), creation and dissolution of joint ventures, stock market (purchase and sale of shares significant takeovers, takeover bids, IPOs / OPSs, convertible bond issues, shareholders’ agreements, etc.), corporate restructuring and private equity.

Pablo has been a professor at the University of the Instituto de Empresa (IE) of the subject of Business Law in the Bachelor of Business Administration (Bachelor in Business Administration) from 2010 to 2016. He also collaborates as a professor in the Master of Legal Advice for Companies of the Carlos III University of Madrid, giving the presentation on listed companies and their specialties, as well as the presentation on OPAs, IPOs and OPSs in the Master of Regulated Sectors of said University.

In addition, Pablo regularly collaborates in the writing of articles for specialized legal publications. His last doctrinal work as co-author has been the chapter entitled “The reform of the competing bids regime” in the collective book “Law of OPAs: Systematic study of the public acquisition bids regime in Spanish Law”, published by Ed. Tirant Lo Blanch, in 2010.

Pablo González Mosqueira has been mentioned in different legal directories such as: 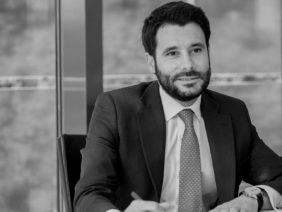